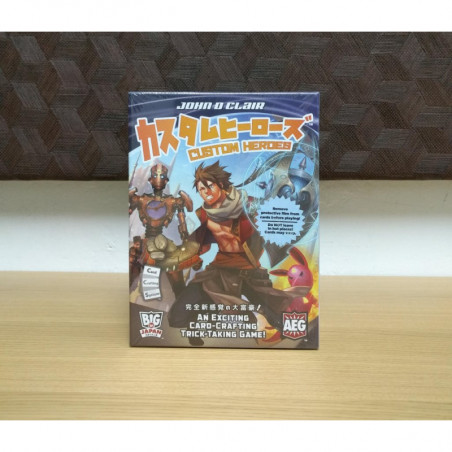 Custom Heroes is a card-crafting, climbing trick game in which plastic cards are added to sleeves in order to modify the cards already in those sleeves.

Please note: Custom Heroes is shipped with a protective plastic film on each card which should be removed prior to play. Once removed the colors will be more vibrant and it will be easier to see cards in a stack inside a sleeve.

The players attempt to win rounds by getting rid of their cards as quickly as possible using the classic climbing trick mechanic. e.g. If a player leads with three 4s then the next player must play three of a kind of equal or higher value. When all players pass, the last player to have played cards leads a new trick with whatever card or set of equal cards they want. Go out of cards first for first place, second for second, etc.

However, you also have advancements you can sleeve onto your cards. These may increase or decrease the value of the cards, or even add new abilities such as turning a card into a wild or reversing the direction of the values (i.e. you are now playing lower numbers instead of higher) or making cards count as multiple copies of themselves, etc.

But since all of the cards are reshuffled and dealt to start a new round, the changes you made may end up with someone else (and vice versa), and the common distribution of values will begin to change and shift over multiple hands. Thus, a good strategy must factor in not just doing well in the current hand, but also managing your resources (card advancements) over multiple hands and maximizing their impact though well timed plays.

You earn points and more advancements based on your end of round position. Be the first player to go out each round and gain the most points, but draw fewer new advancements for the next hand. To win a player must first get to 10 points, and then win a hand.