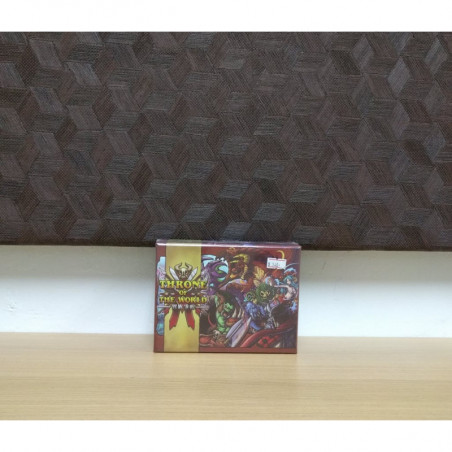 異族戰爭 / Throne of the World

In Throne of the World, each player represents one of the thirteen races struggling for that throne. Players play different kinds of profession cards that can either produce income or force other players to take their cards back into their hands. In each turn, players choose a playing mode that determines how many cards they draw and how many action points they get. Action points are used to play cards, either profession cards, action cards (which activate the profession cards), or special skill cards. The different races can also use their special abilities to tip the balance in their favor.

Depending on the strategy a player chooses for a given turn, she gains a certain number of cards and action points. Action points are needed to play cards, either to let different profession enter the playing field, activate those already in the field, or use other abilities. Activated cards can earn money or attack other players.

A player wins the game immediately by meeting one of the following victory conditions: