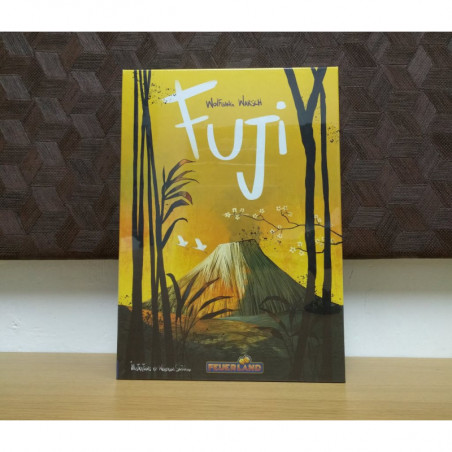 In Fuji, you play as a group of adventurers on their way to Japan‘s most famous volcano, Mount Fuji. But just before you arrive at your destination, the earth begins to shake and the volcano erupts! Now your group must escape the deadly lava flows as quickly as possible to reach the safe village.

In this cooperative dice game, players simultaneously and secretely roll their dice behind their screens in each round. During the game, you must find the best way across a certain number of terrain cards to the safe village for each player. Each terrain card has a given dice requirement. You can move to a card only if you match this requirement better than both your neighbors — but since you know only your own dice and can communicate only vaguely, you will need both skill and luck to save yourselves.

The game ends with a success if all players reach the village. It fails if one of you falls victim to the lava or becomes too exhausted to proceed.