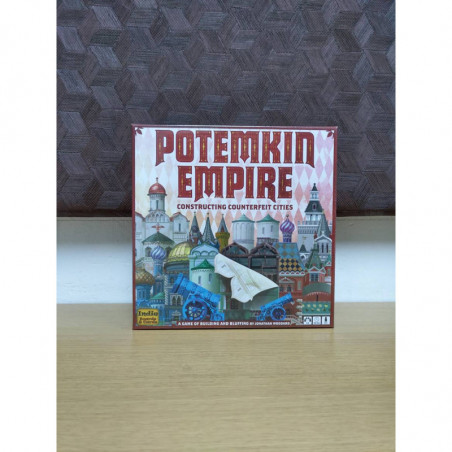 Russia, 1787: Empress Catherine the Great is taking a surprise trip down the Dnieper River to survey her new kingdom. This will take her directly past your old, unremarkable village. You don't have the time or money to make your village impressive, but with a few pieces of timber and some strategically placed facades, you could certainly make your village seem impressive. More impressive, at least, than all the villages around it. What's behind the riverfront doesn't matter, after all — only the opinion of her Imperial Majesty.

In Potemkin Empire, you play the role of a mayor of a small Russian village. You attempt to impress Empress Catherine by convincing her that you have the most prosperous and stable village in the land. But with her visit quickly approaching there's no time to really fix your village, so you're just going to have to make it look as impressive as possible. That is to say, you're faking it. You'll accomplish this by drafting interior cards that are either real or fake, then combining them with facades to construct an imposing, if flimsy, kingdom.

You score points by producing goods in your industrial buildings, exposing opponents' fake buildings with spies, constructing government and cultural buildings, and passing off fake buildings as real ones. The player with the most points at the end of the game wins!