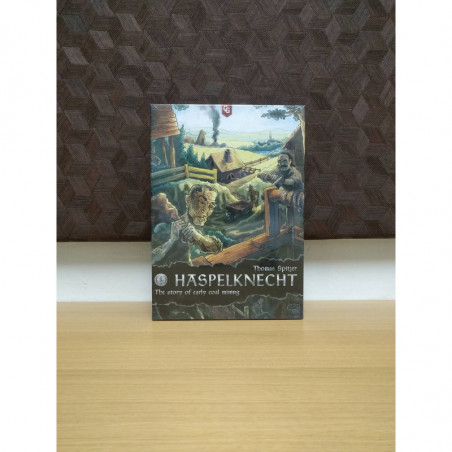 In Haspelknecht: The Story of Early Coal Mining, the first title in Thomas Spitzer's highly acclaimed Coal Trilogy, the players take upon the role of farmers with opportunities to exploit the presence of coal in their lands in the southern part of the Ruhr region of Germany.

The game is set during a time when the lands were mostly covered with forests and roads were rare. Coal was discovered here, close to the Earth's surface. During the game, players obtain knowledge about this new material, extend their farms, and dig deeper in the ground to extract more coal. The game has many paths that lead to victory.

Haspelknecht has an innovative action selection mechanism. You must select the correct tasks while being mindful of quickly accumulating pit water, for it can stall your efforts and prevent your extraction of valuable coal.

The game offers a lot of variation and replayability through unique methods in setting-up the development tiles.